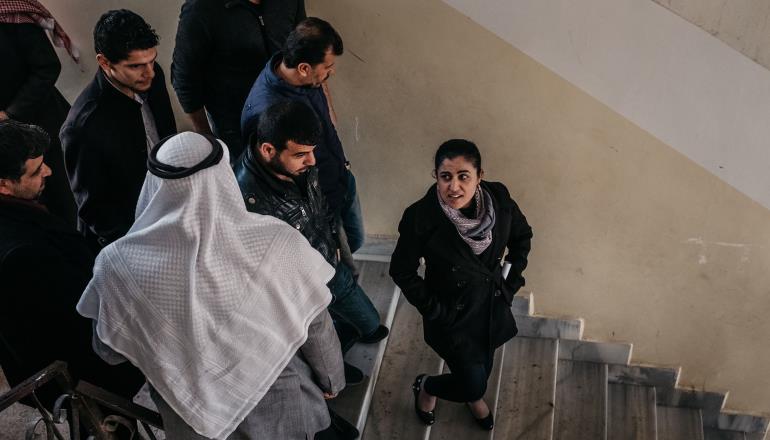 Xavier de Lauzanne
Born in the Paris region, Xavier de Lauzanne attended the Hotel Management School before organizing hotel/hospitality training courses for disadvantaged young people in Martinique, Vietnam and Cambodia. A film enthusiast, he purchased his first digital video camera in 1999, and studied filmmaking.
Deeply touched by the people he encountered during his travels, he focused on independent, socially aware documentaries that are human-centered.
Over the years, he has worked in Thailand, Cambodia, Laos, Vietnam, the Philippines, India, Iraq, Syria and France, directing short and feature-length documentary films, for television and for release in theaters, for which he has won numerous awards, in France and abroad.

Leila Mustafa is a Syrian Kurd. She is fighting for Raqqa, the former capital of the Islamic State, which was laid to waste by the war. An engineer by training, elected mayor at barely 30, she operates in a man's world and her mission is to rebuild her city, enable reconciliation and create a democracy. No ordinary mission.
A writer, Marine de Tilly, crosses the border between Iraq and Syria to meet her. In a city that is still dangerous, she has nine days to discover and delve deeper into Leila’s story.

DIRECTOR'S STATEMENT When I first heard of a book project on Raqqa’s young female mayor, I was intrigued by the presence of such an admired figure in this context.
This project was something of a gamble. Very little information on Leila Mustapha had trickled out at this point. But I was convinced that something exceptional was happening there, of great import not only for the region, but also for the rest of the world. After having for so long associated this city - Raqqa - to accounts and images of terror, I sensed that I had potentially stumbled onto something new.
And so in February 2019 I embarked with Marine de Tilly on this journey into the unknown. Leila showed us how humanity, in all its complexity, could sometimes produce the very best that it has to offer, in the exact place where it had spawned the very worst. We - Marine and I - were to witness, first-hand, the birth of a rising star in Syria’s dark and troubled skies.